Air Infiltration
Refers to how much air can get through a window or door.

Awning
Window similar to a casement except the sash is hinged at the top and always swings out.

Balance
A mechanical device (normally spring-loaded) used in single- and double-hung windows as a means of counterbalancing the weight of the sash during opening and closing.

Bay Window
An arrangement of three or more individual window units, attached so as to project from the building at various angles. In a three-unit bay, the center section is normally fixed, with the end panels operable as double-hung or casement windows.

Bow Window
A rounded bay window that projects from the wall in an arc shape, commonly consisting of five sashes.

Casement
A window sash that swings open on side hinges: in-swinging are French in origin; out-swinging are from England.

Caulking
A mastic compound for filling joints and sealing cracks to prevent leakage of water and air, commonly made of silicone, bituminous, acrylic, or rubber-based material.

CFE
(California Forced Entry Test): A pass or fail test that measures the windows ability to stay locked and closed under extreme pressure.

Condensation
The deposit of water vapor from the air on any cold surface whose temperature is below the dew point, such as a cold window glass or frame that is exposed to humid indoor air.

Conduction
Heat transfer through a solid material by contact of one molecule to the next. Heat flows from a higher-temperature area to a lower-temperature one.

CRF
Condensation Resistance Factor. An indication of a window’s ability to resist condensation. The higher the CRF, the less likely condensation is to occur. Based on AAMA standard.

Dewpoint
The temperature at which water vapor in air will condense at a given state of humidity and pressure.

Double Glazing
In general, two panes of glass separated by a spacer and air space within an opening to improve insulation against heat transfer and/or sound transmission. In factory-made double glazing units, the air between the glass sheets is thoroughly dried and the space is sealed airtight, eliminating possible condensation and providing superior insulating properties.

Double-Hung Window
A window consisting of two sashes operating in a rectangular frame, in which both the upper and lower halves can be slid up and down. A counterbalance mechanism usually holds the sash in place.

Egress Code
Is a law that specifies that a window must be able to open wide enough for a person to get out or a firefighter to get in.

Fixed Panel
The inoperable panel of a sliding window or slider glass door.

Fixed Window
A window with no operating sashes.

Frame
The fixed frame of a window which holds the sash or casement as well as hardware.

Gas Fill
A gas other than air, usually argon or krypton, placed between two panes of glass to reduce the U-factor by suppressing conduction and convection.

Glazing Bead
A molding or stop around the inside of a window frame to hold the glass in place.

Greenhouse Window
A three-dimensional window that projects from the exterior wall and usually has glazing on all sides except the bottom, which serves as a shelf.

Heat Gain
The transfer of heat from outside to inside by means of conduction, convection, and radiation through all surfaces of a house.

Heat Loss
The transfer of heat from inside to outside by means of conduction, convection, and radiation through all surfaces of a house.

Hinged Windows
Windows (casement, awning, and hopper) with an operating sash that has hinges on one side.

Horizontal Slider
A window with a movable panel that slides horizontally.

Insulating Glass Unit
Two or more panes of glass separated by a spacer and hermetically sealed to form a single glazed unit with one or more air spaces in between.

Laminated glass
Two or more sheets of glass with an inner layer of transparent plastic to which the glass adheres if broken. Used for safety glazing and sound reduction.

Meeting Rail
The part of a sliding window, a sliding glass door, or a hung window where two panels meet, and create a weather barrier.

Muntin
Referred to as “Grids”; these muntins are designed to give the appearance of a multilight sash, but in a single panel.

Operable Window
Window that can be opened for ventilation.

Pane
A single sheet of glass.

Picture Window
A large, fixed (non operable) window so that it is usually, but not always, longer horizontally than vertically to provide a panoramic view.

R-Value
A measure of the resistance of a glazing material or fenestration assembly to heat flow. It is the inverse of the U-factor (R = 1/U) and is expressed in units of hr-sq ft-°F/Btu. A high-R-value window has a greater resistance to heat flow and a higher insulating value than one with a low R-value.

Relative Humidity
The percentage of moisture in the air in relationship to the amount of moisture the air could hold at that given temperature. At 100 percent relative humidity, moisture condenses and falls as rain.

Rough Opening
The opening in a wall into which a door or window is to be installed.

Safety Glass
See Laminated or Tempered Glass. A strengthened or reinforced glass that is less subject to breakage or splintering.

Sash
The portion of a window that includes the glass and the framing sections directly attached to the glass, not to be confused with the complete frame into which the sash sections are fitted.

Screen
Woven mesh of metal, plastic, or fiberglass stretched over a window opening to permit air to pass through, but not insects.

Sealant
A compressible plastic material used to seal any opening or junction of two parts, such as between the glass and a vinyl sash, commonly made of silicone, butyl tape, or polysulfide.

Single-Hung Window
A window consisting of two sashes of glass, the top one stationary and the bottom movable.

Sliding Glass Door
A door fitted with one or more panels that move on rollers horizontally on a track and/or in grooves.

Sliding Window
A window fitted with one or more sashes opening by sliding horizontally in grooves provided by frame members.

Solar Heat Gain Coefficient (SHGC)
The fraction of solar radiation admitted through a window or skylight, both directly transmitted, and absorbed and subsequently released inward. The solar heat gain coefficient has replaced the shading coefficient as the standard indicator of a window’s shading ability. It is expressed as a number between 0 and 1. The lower a window’s solar heat gain coefficient, the less solar heat it transmits, and the greater its shading ability. SHGC can be expressed in terms of the glass alone or can refer to the entire window assembly.

Sound Transmission Class (STC)
The sound transmission loss rating of a material over a selected range of sound frequencies. The higher the number, the less sound transmitted.

Spacer
An assembly of materials designed to reduce heat transfer at the edge of an insulating window. Spacers are placed between the panes of glass in a double- or triple-glazed window.

Tempered Glass
Treated glass that is strengthened by reheating it to just below the melting point and then suddenly cooling it. When shattered, it breaks into small pieces. Approximately five times stronger than standard annealed glass; is required as safety glazing in patio doors, entrance doors, side lights, and other hazardous locations. It cannot be recut after tempering.

Threshold
The member that lies at the bottom of a sliding glass door or swinging door; the sill of a doorway.

Tilt Window
A single- or double-hung window whose operable sash can be tilted into the room for interior washability.

Tinted Glass
Glass colored by incorporation of a mineral admixture. Any tinting reduces both visual and radiant transmittance.

U-Factor (U-value)
A measure of the rate of non-solar heat loss or gain through a material or assembly. It is expressed in units of Btu/hr-sq ft-°F (W/sq m-°C). Values are normally given for NFRC/ASHRAE winter conditions of 0° F (18° C) outdoor temperature, 70° F (21° C) indoor temperature, 15 mph wind, and no solar load. The U-factor may be expressed for the glass alone or the entire window, which includes the effect of the frame and the spacer materials. The lower the U-factor, the greater a window’s resistance to heat flow and the better its insulating value.

Ultraviolet Light (UV)
The invisible rays of the spectrum that are outside of the visible spectrum at its short-wavelength violet end. Ultraviolet rays are found in everyday sunlight and can cause fading of paint finishes, carpets, and fabrics.

Vent
The movable framework or sash in a glazed window that is hinged or pivoted to swing open.

Vinyl
Polyvinyl chloride material, which can be both rigid or flexible, used for window frames.

Visible Light
The portion of the electromagnetic spectrum that produces light that can be seen. Wavelengths range from 380 to 720 nanometers.

Visible Transmittance (VT)
The percentage or fraction of the visible spectrum (380 to 720 nanometers) weighted by the sensitivity of the eye, that is transmitted through the glazing.

Warm-Edge Technology
The use of low-conductance spacers to reduce heat transfer near the edge of insulated glazing.

Weatherstripping
A strip of resilient material for covering the joint between the window sash and frame in order to reduce air leaks and prevent water from entering the structure.

Weep Hole
A small opening in a window or door sill member through which water may drain to the building exterior.

THE STAR OF ENERGY SAVINGS 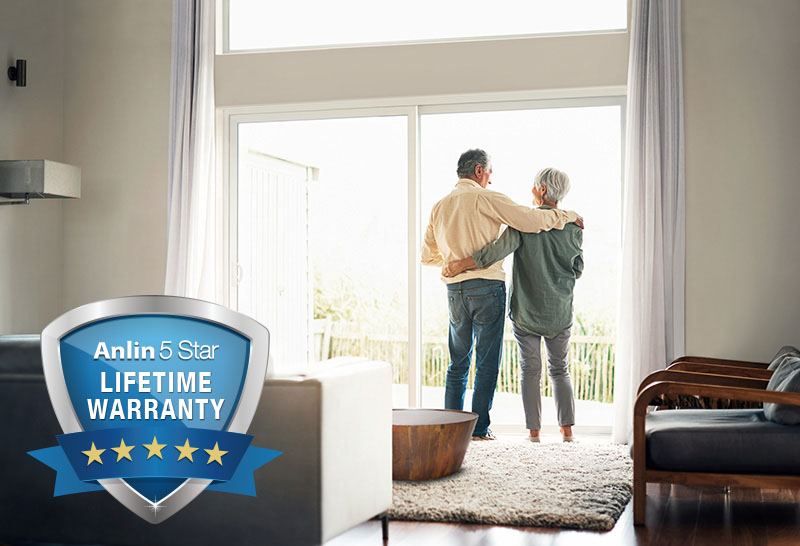 The Best Warranty
in the Industry

Enjoy peace of mind with Anlin’s True Double Lifetime Warranty covering accidental glass breakage, parts, and labor. Anlin’s lifetime warranty coverage is also transferable to the next subsequent homeowner if you sell your home. That is two lifetimes of truly worry-free windows.

Give your home the